Sorghum is a Sustainable Grain 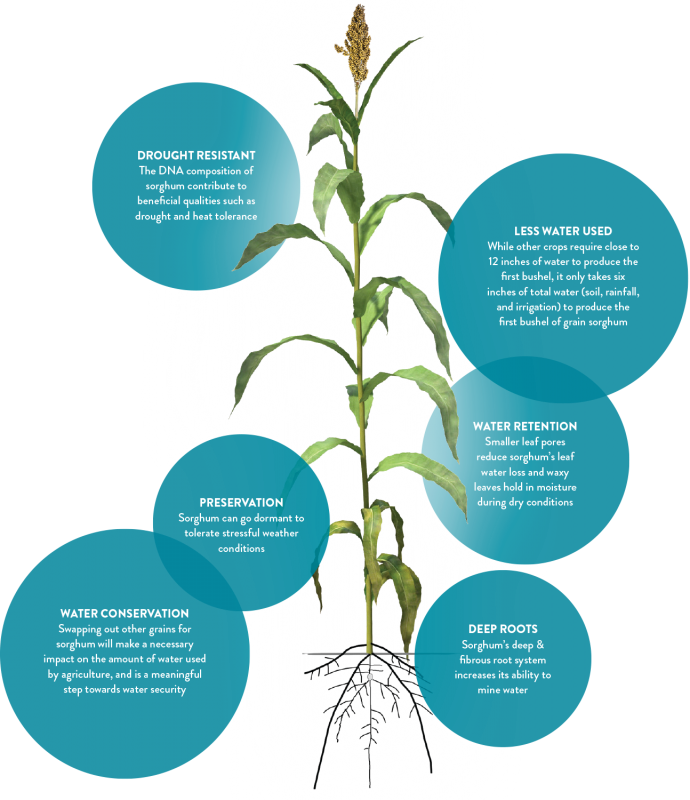 The DNA composition of sorghum contribute to beneficial qualities such as drought and heat tolerance.

Swapping out other grains for sorghum will make a necessary impact on the amount of water used by agriculture, and is a meaningful step towards water security.

The future of sorghum as a food security grain is impressive as the impact of climate change on worldwide agriculture threatens to decrease the quantity and jeopardize the quality of our food supplies. Climate change involves such aspects as higher temperatures, extreme weather, drought, increasing levels of carbon dioxide and sea level rise. Scientists use a wide range of techniques to make predictions about the future of the environment, including a variety of models and statistical analyses.

All crops will be affected by climate change and each in different ways. Focusing on just the expectation by 2050 of higher temperature and higher levels of CO2 alone influence drought and heat risks for crops. There is considerable knowledge of crop growth and development responses to these environmental changes along with the physiology and genetics of crop plants.

Ninety-five percent of plants are classified as C3 species. Most grasses, such as sorghum, are a C4 plant species. Sorghum has the ability already to adapt to drought and heat. In general, it has a narrower root morphology than corn, a beneficial leaf canopy and capability to capture sun light especially well in lower rain fed areas. Sorghum’s C4 photosynthesis is an alternate pathway of the Calvin Cycle during respiration and thus uses water more efficiently, conserving water while their stomata are closed and still photosynthesizing (feed themselves).

Because sorghum has better water use efficiency and natural heat tolerance, as increased CO2 levels occur with climate change this crop is more sustainable than other C4 species while not increasing inputs; especially water. There is research indicating that climate change can decrease yields worldwide of commodity crops including wheat, cocoa and corn. Other studies have shown that barley, wheat, potatoes and rice have 6 to 15% lower concentrations of protein when grown at increased levels of carbon dioxide, however the protein content of sorghum did not decline significantly. U.S. companies depend on some of these ingredients to manufacture popular food products. A price spike in some of these items could sharply hurt markets not to mention companies that rely on these ingredients. Thinking about the impact of the most extreme changes can help companies better prepare for their future.

“Sorghum, a whole grain that has been a staple food in Africa and India for centuries, is finally getting its moment on the American table. It is well suited for our modern world because it is highly nutritious with a mildly nutty flavor, it’s gluten-free and it’s easy to grow even in drought conditions.”